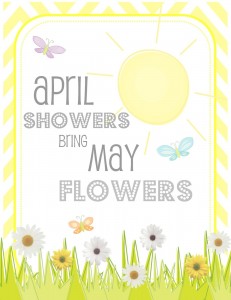 So in the blog from last month, I mentioned that with February being over, that would probably mean that we would finally be enjoying some nicer, spring weather… HA! For those of you not in the Hampton Roads Area, March was pretty miserable! But as I sit here typing this, the high for today is going to be over 60 and it will get to 70+ degrees over the next few days… I’m worried it’s an April Fools joke 😉
Getting together an April goals list has been something that I have been putting off this month. I realized a few days ago that I was going to be moving in three months and went into a bit of a panic thinking about all the stuff we had to purge and everything that needed to happen in order for us to actually get into the new house (painting, cleaning, more painting, moving, even more painting… you get the idea). It is going to be a pain (I mean really, who likes moving!), but will be worth it in the end because I will not only have a much bigger house for our little family, but I will have two dedicated spaces for studio work and client meetings/one on one mentoring sessions! Hooray!!! I have a vision for how I want those spaces to look, so I will be sure to let you know how that comes along 😀