Wow, can you believe it’s already been a year since Michelle and Clint tied the knot at their gorgeous wedding last year?! We always have such a blast whenever we hang out with these two lovebirds, so when it was time for us to do their Waterside anniversary session, I knew it would be nothing but smiles and laughter the entire time! 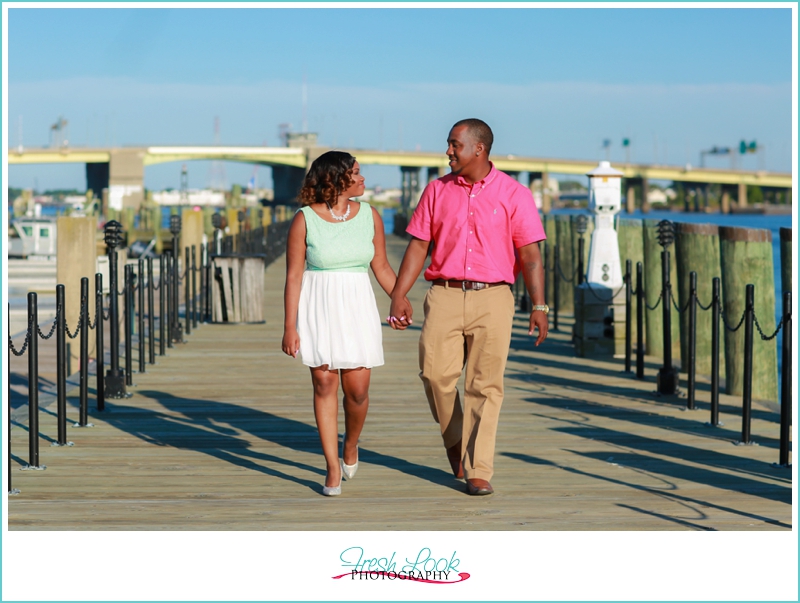 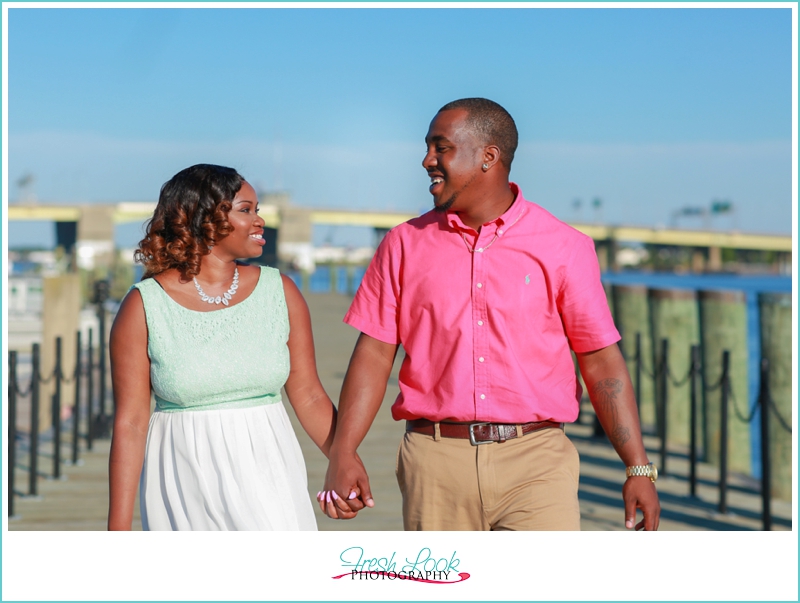 I always love hearing about how a couple met, so here’s a summary of their love story!

Clinton and I met back in October 2010 at Dunkin Donuts.  At that time I was the store manager and Clinton was a regular customer that would order a large coffee light and sweet.  I would usually have his coffee ready waiting  on the counter when he would walk in.  One day clinton came and said “I must be pretty special because you always have my coffee ready everyday.”  I smiled and replied that it’s a part of my job to insure great customer service.  A couple of visits later he gave me his number.  We texted/talked for about 2 months before we went on our 1st date.  I’m not gonna lie, I only thought it would be that 1st date and that’s it, but he couldn’t resist my charm.  Maybe 2 months later we made it official.  I think I knew it was love was after him and my son met for the 1st time.  Hezekiah didn’t really take to people and would be really be over protective of me at a young age. But the 1st time he met Clint he was so friendly and was showing him his toys it was an awesome feeling, and clint is pretty great with him.  On june 19th 2013 my 26th birthday Clint surprised me after dinner and proposed, and the rest is history. On August 16th 2014 we got married and has been living happily ever after.

Marriage this past year has been great.  We were blessed to become homeowners.  We really wasnt planning on looking to buy our 1st year, but we started talking to the right people and we got the ball rolling.  Our bond as a family is stronger, and our love for each other is stronger than ever. 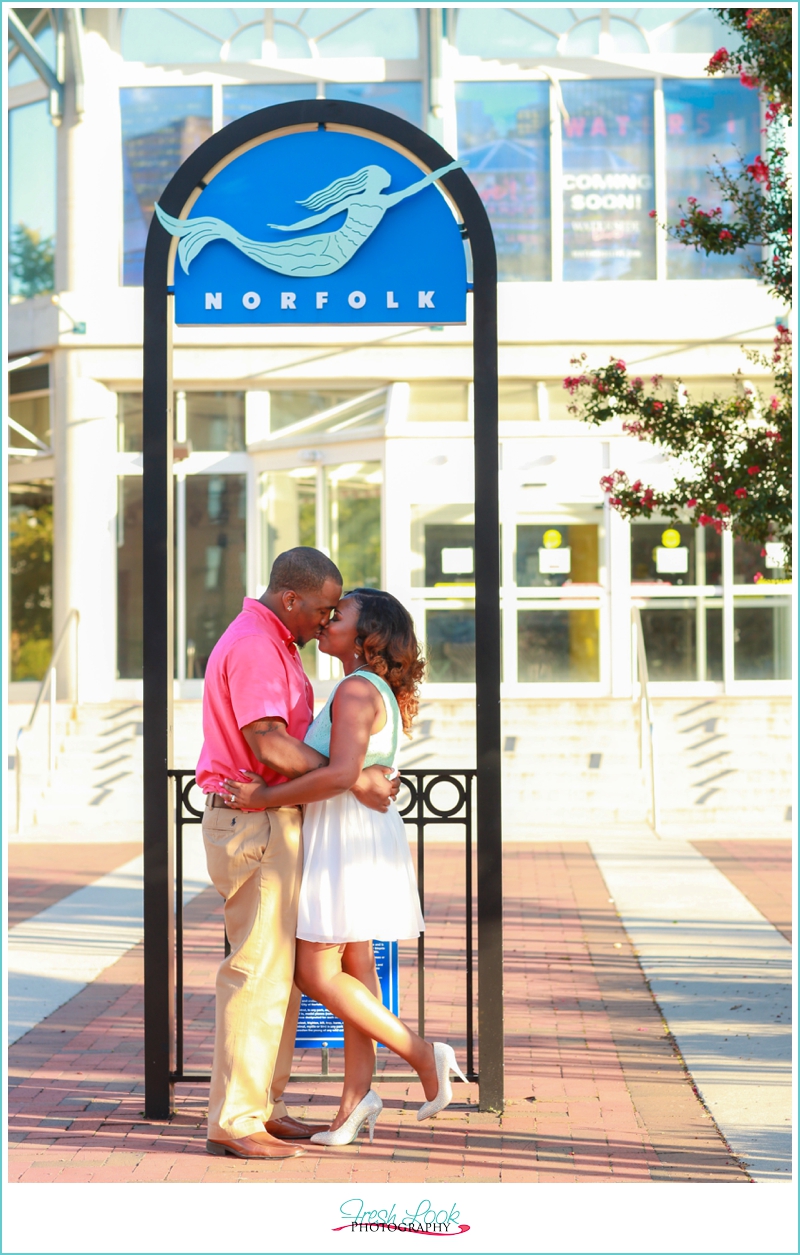 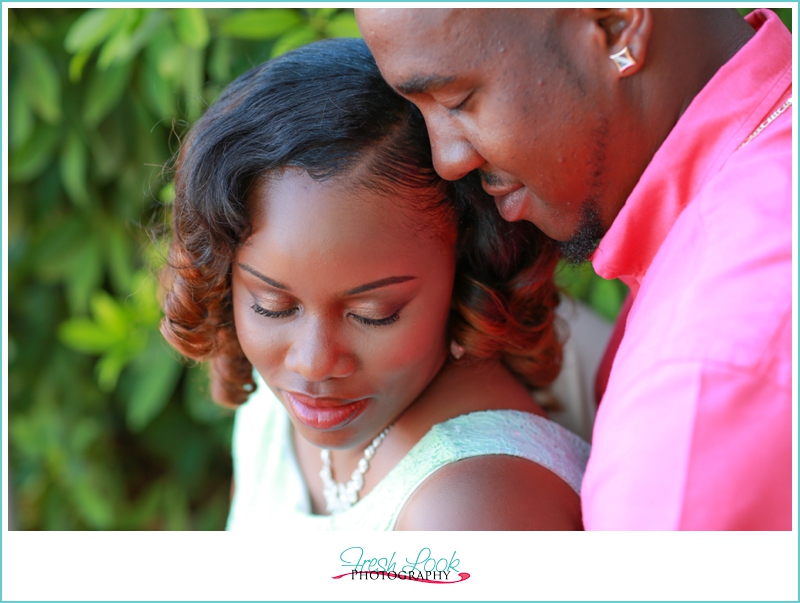 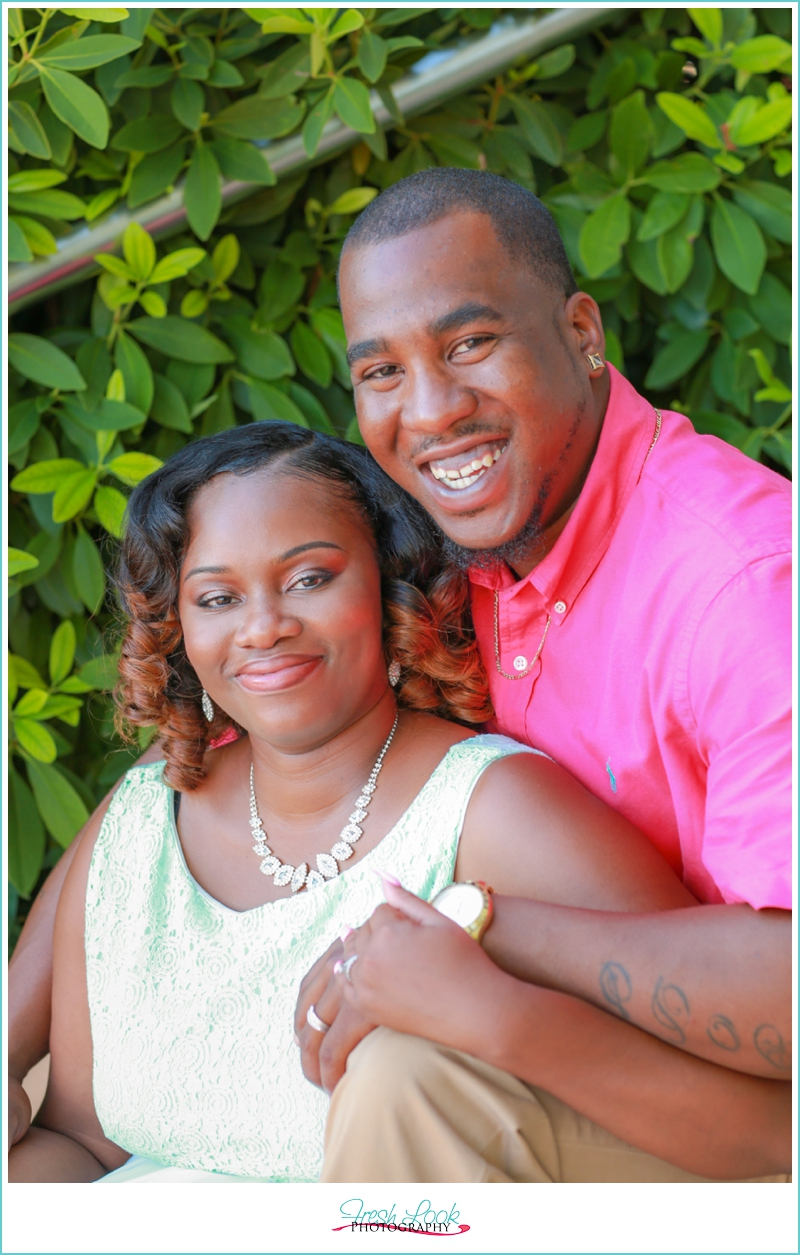 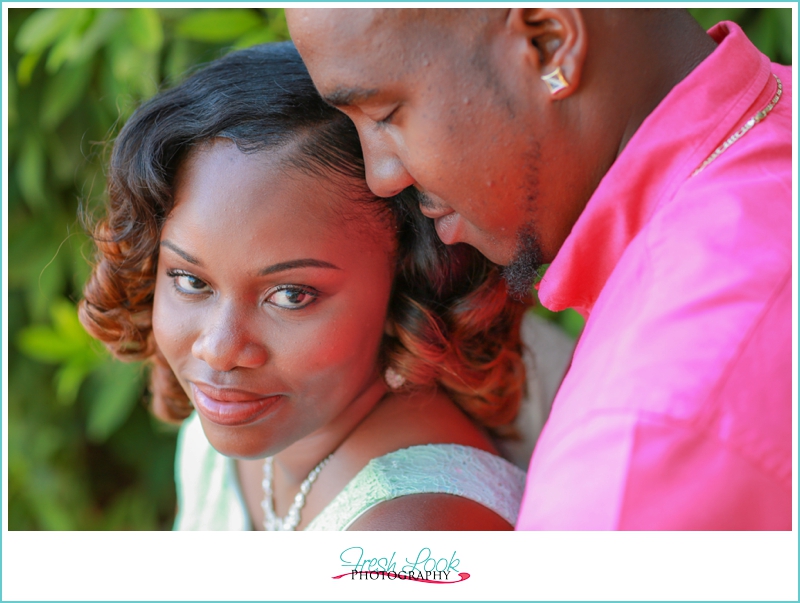 It was early October 2010 when we met in Dunkin’ Donuts. Michelle was working and I was a newly regular customer. The first time I saw her I her knew there was something about her that had me very intrigued. In her opinion, my awkward and obviously nervous jokes were slightly on the corny side.

After months of persistency and severe frustration I was finally awarded at date. After a few months of dating we entered into a committed relationship and shortly after I knew it was love. I mean, how can someone push your buttons and you still want to be near them, it must be, right?

This first year of marriage has been beyond amazing. I anticipated a great year but could not have imagined as successful of a year as it was. People often say so much changes once you get married. I feel like our relationship strengthened tremendously. We were blessed with the gift of home ownership, the opportunities to travel both foreign and domestic, upon so much more. This first year of marriage has been more than exceeded our expectations and have us looking forward to the years to come. 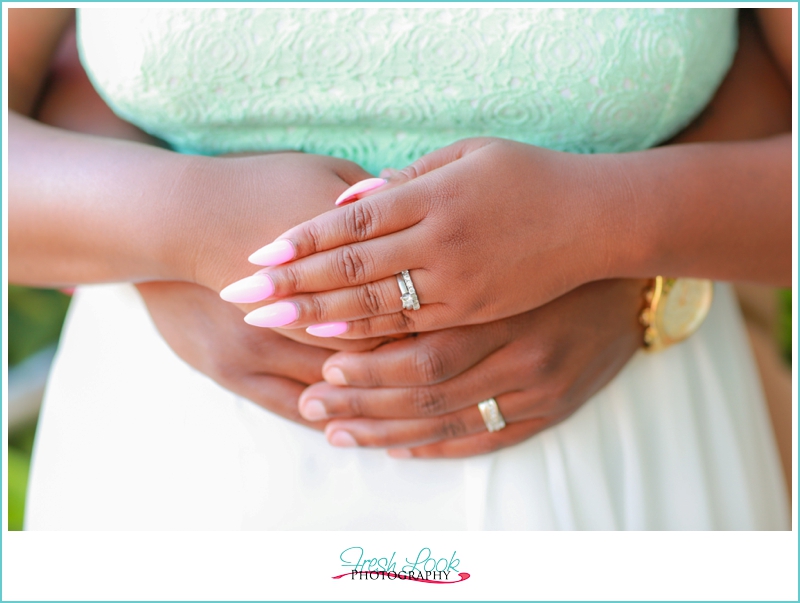 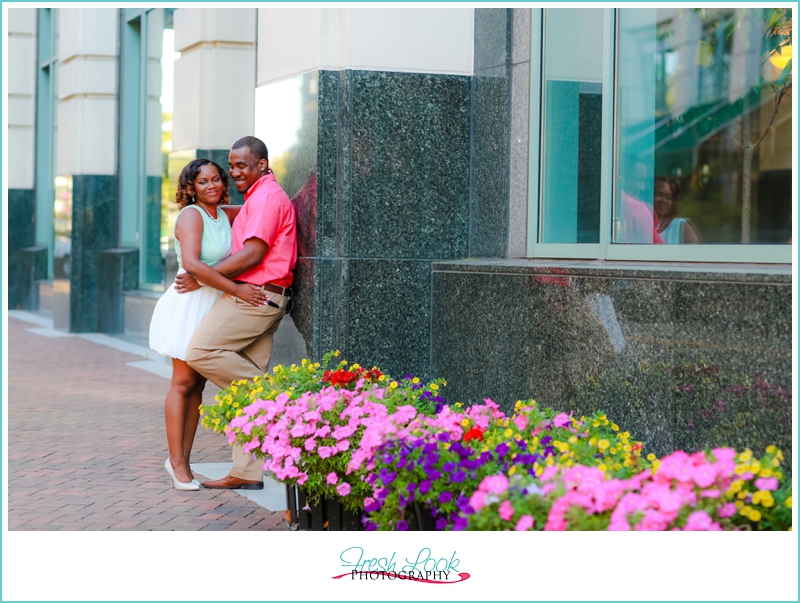 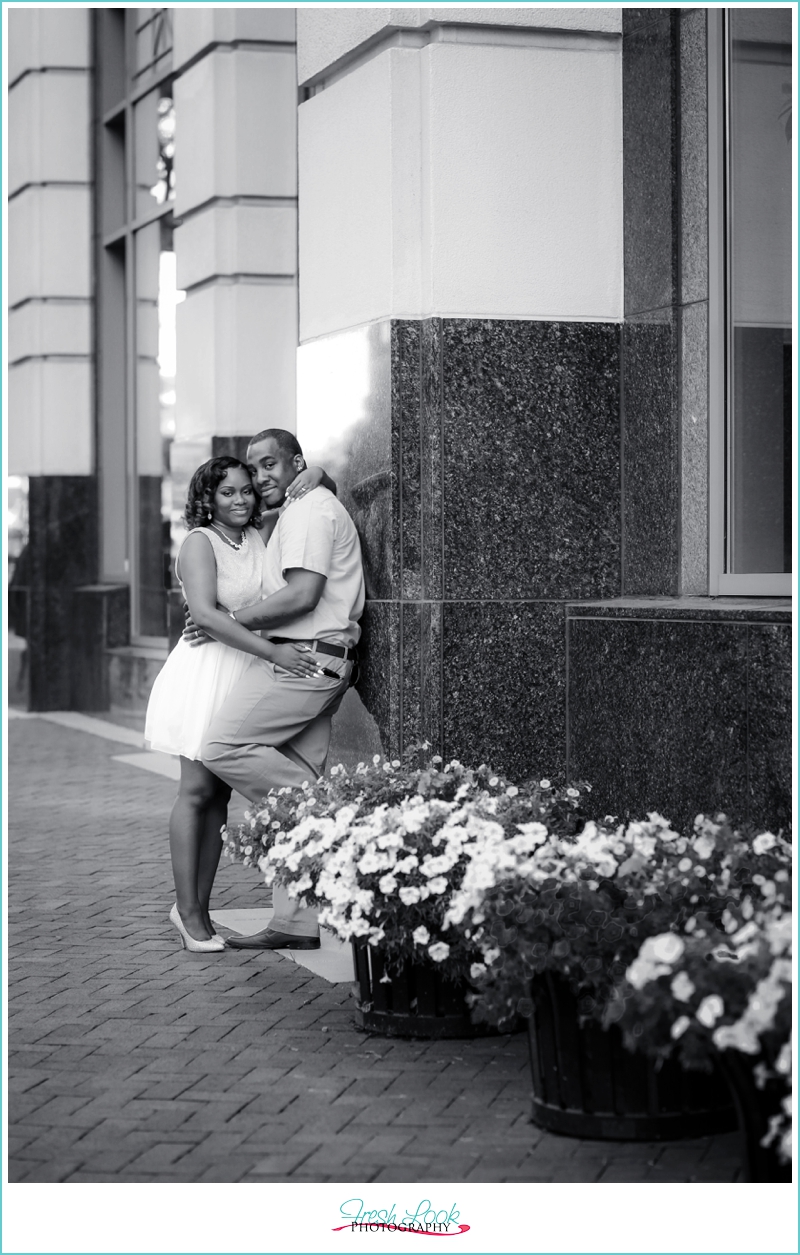 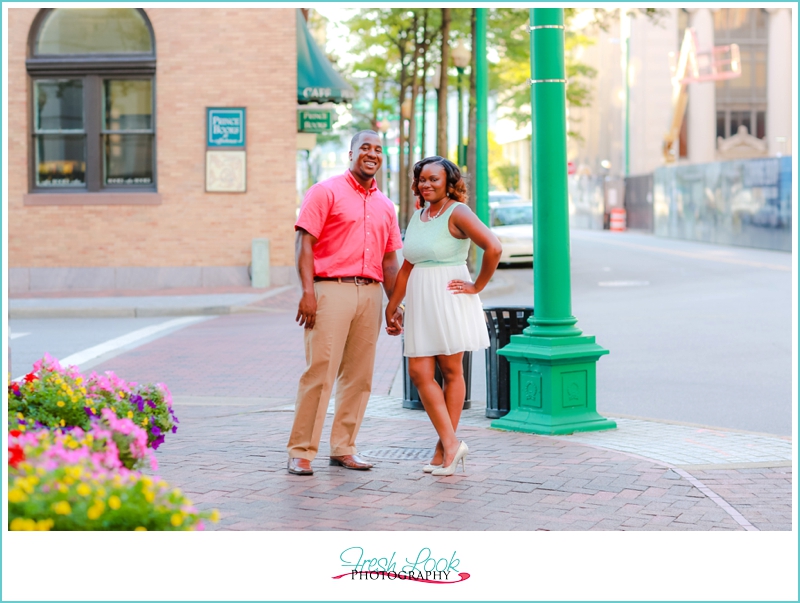 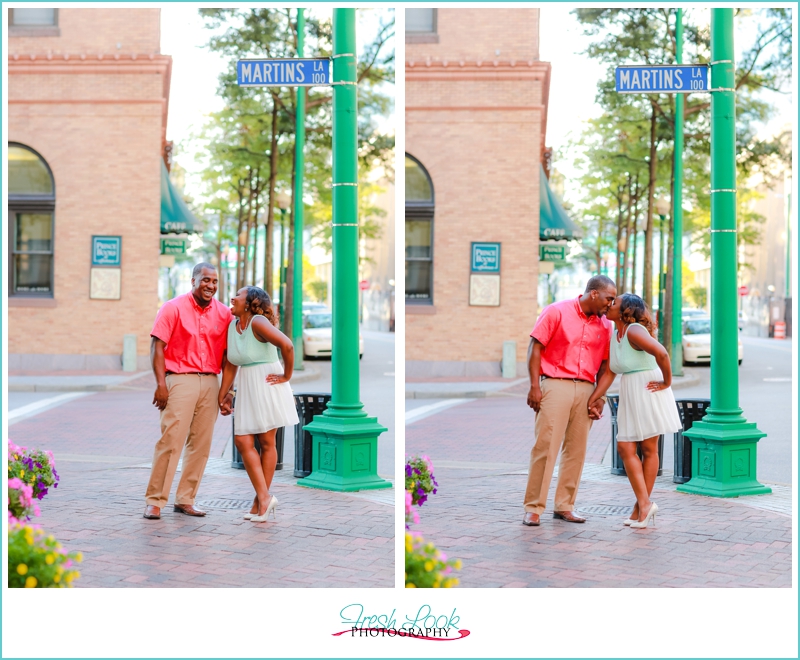 Michelle and Clint, we love you guys bunches and are so glad that we not only get to call you clients, but also our dear friends! It’s always a blast hanging out and we can’t wait for the next time we’re able to get together!!!

If you’ve finished looking at this Waterside anniversary session and are thinking to yourself – I wanna do that too! Awesome!!! We would LOVE to create a custom photo session for you and the ones you love! Feel free to message me by hitting the { CONTACT ME } button or by giving me a call at 757-749-5350. I can’t wait to create some magic for you!