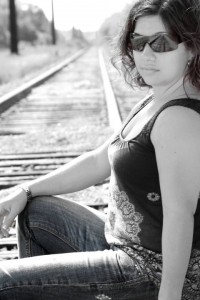 There are so many awesome pictures that take place on train tracks, heck, I even have an old picture on the tracks (circa 2009!); and recently I’ve had a few clients ask to do their session on or near the tracks. Unfortunately this is not only dangerous, but also illegal, so I want to talk about railroad safety in photo shoots.
Trespassing on railroad property and facilities has become a more serious problem in recent years. According to the Federal Railroad Administration’s Railroad Safety Statistics, Annual Report, there are over 500 trespasser fatalities each year.
Because railroad tracks are private property, it is illegal to photograph on them. Even in the case of abandoned or closed tracks, they are still owned by the railroad company and you would still be trespassing. Here are specifics about what the FRA has to say about Virginia laws:

VIRGINIA
It is unlawful in Virginia for anyone to go upon the track of a railroad other than to pass over the track at a public or private crossing without the consent of the railroad company, or person operating the railroad.
It shall be a Class 4 misdemeanor for the first violation. If a second violation occurs within two
years of the first violation, it is punishable as a Class 3 misdemeanor. A third violation within two years of a second, is punishable as a Class 1 misdemeanor. Va. Code Ann. § 18.2-159

A 100-car freight train traveling at 55mph requires more than a mile to stop… that’s the length of 18 football fields!

Want a sobering statistic? According to Operation Lifesaver, roughly every 3 hours, a person or vehicle is hit by a train in the United States. Photographers who bring clients to take pictures on train tracks are not only putting themselves at risk, but also their clients. It might sound far fetched, but there is a very real possibility that those involved in the shoot could get hurt or killed! You might be willing to take these risks yourself, but you have no right to endanger somebody else for the sake of a nice picture.

I feel it is my responsibility to let clients (as well as other photographers) know about the potential danger, as well as warn them as to the illegal nature of shooting on railroad tracks. This post is not meant to offend anyone, but rather bring to light a subject which can often cause some confusion.

If you really want to capture photos on railroad tracks, head to the Railroad Museum of Virginia, and take some pictures while helping the museum to preserve the displays.

Here is what Amtrack had to say about it.

Union Pacific is also very particular about their rules.